Hey guys, this has taken me a good while but it's a combination of a number of smaller updates I've made to Warsim this year so far. I haven't been able to get a release out which has been difficult for me so I'm glad to finally be able to put something out there! I hope you are all well and safe :)

Previously while the leaders could vary, the mercenary companies spawned where basically always human with exception to one special event based demon warband. Now you can get goblin mercenaries and they interact in a number of interesting ways depending on your policy towards goblins. Go get em green bois!

* Made goblin mercs average out 40% cheaper than normal mercs

* Added 10% cost discount for all groups if goblin celebration active 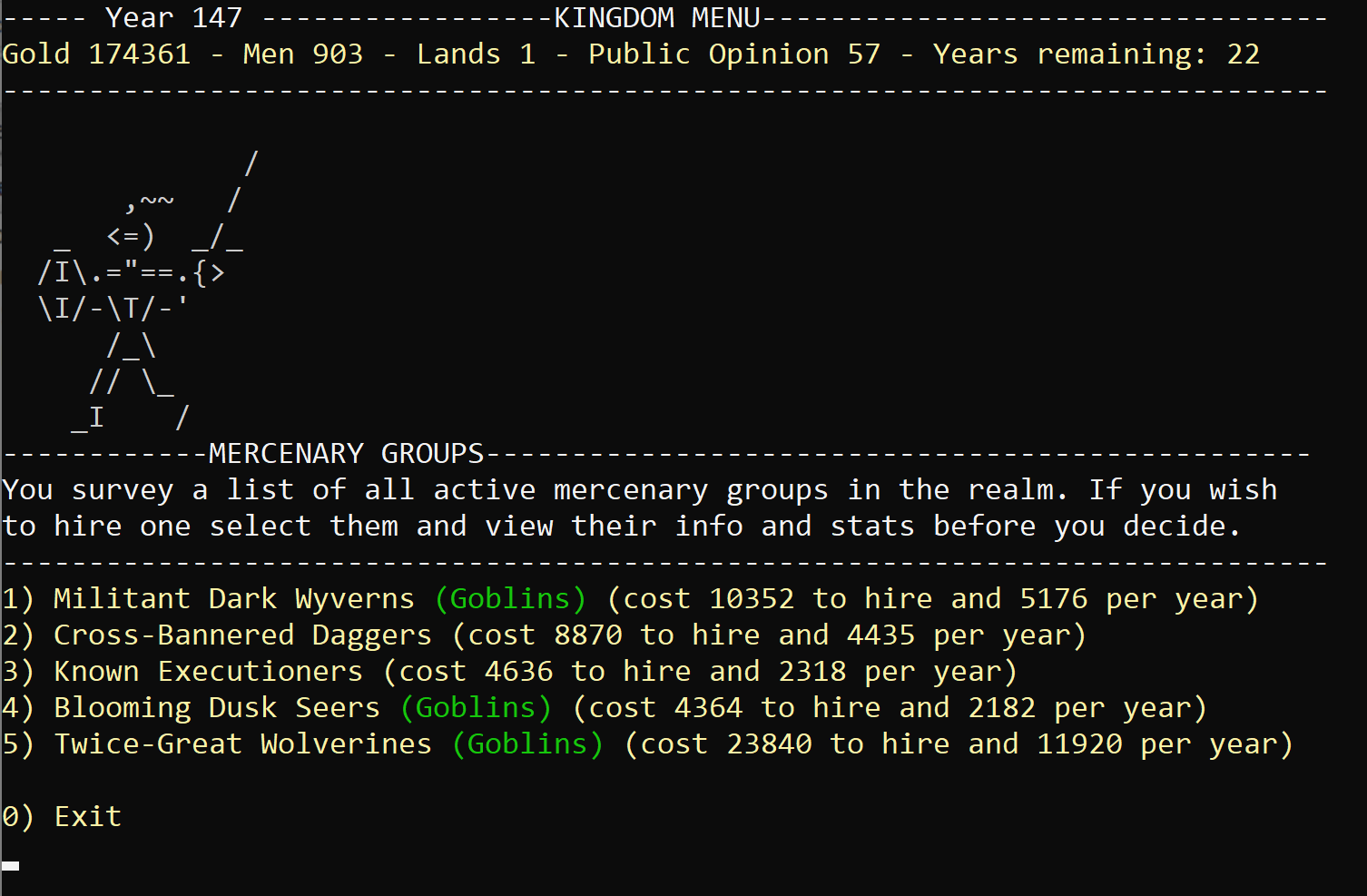 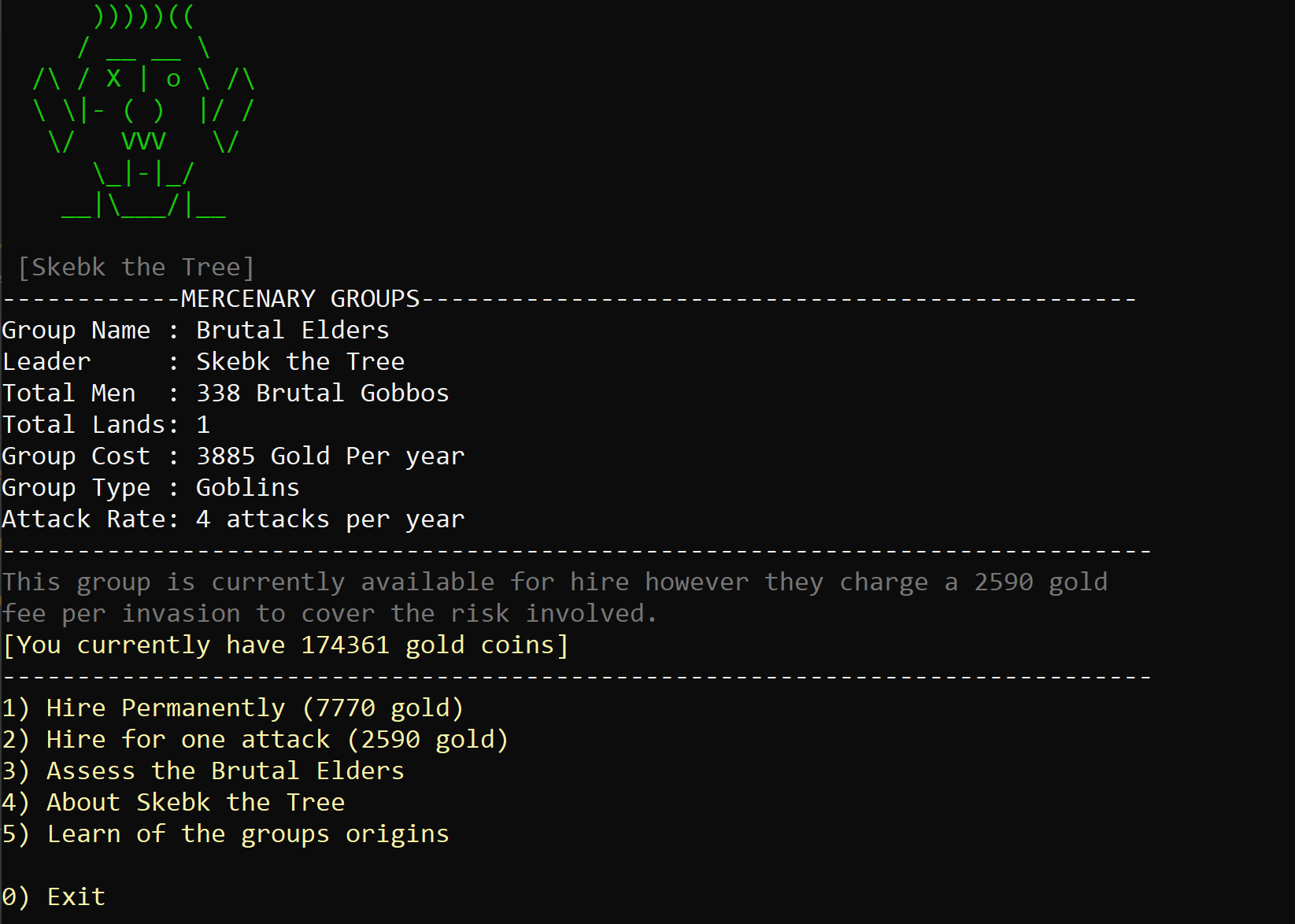 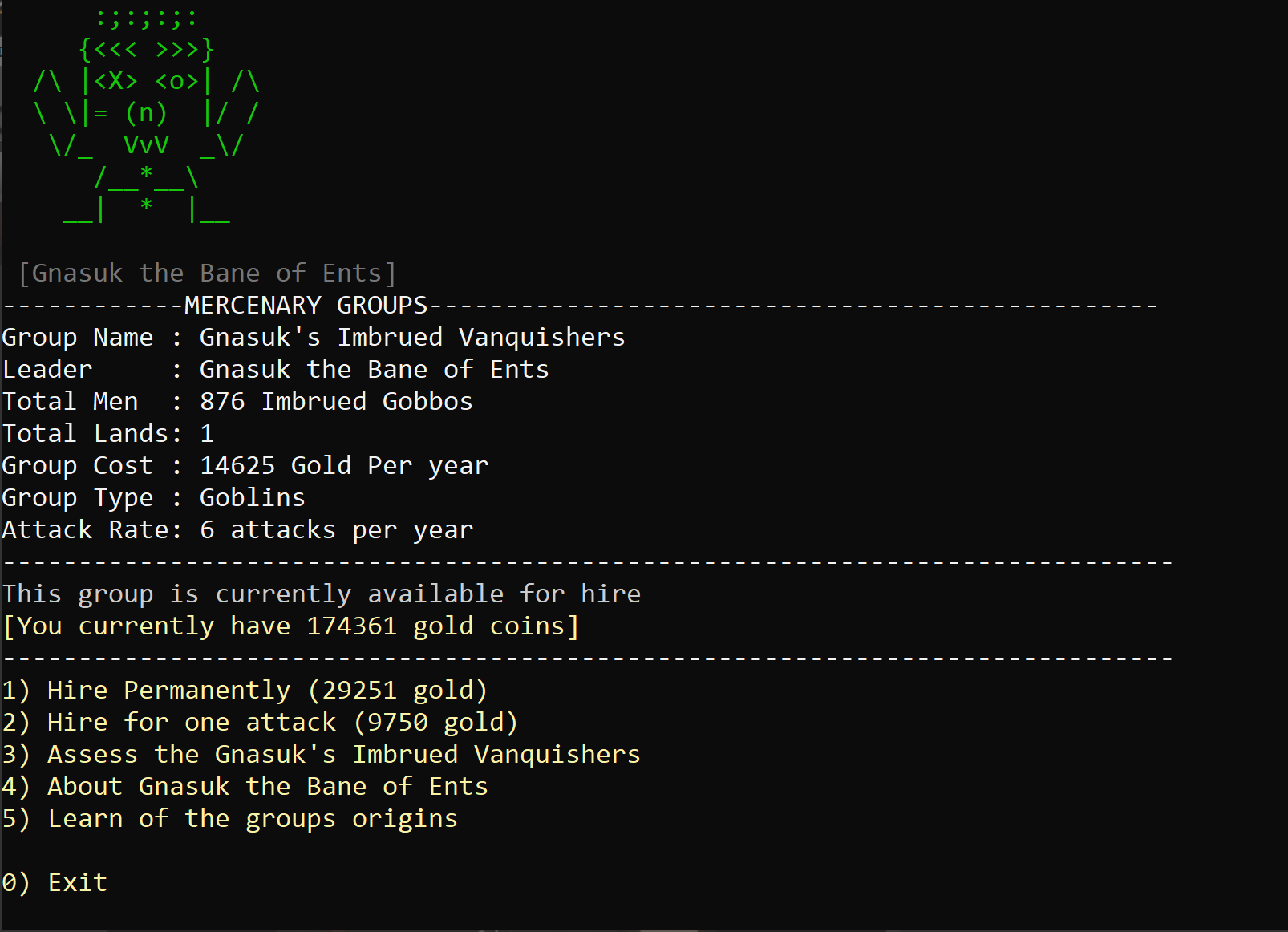 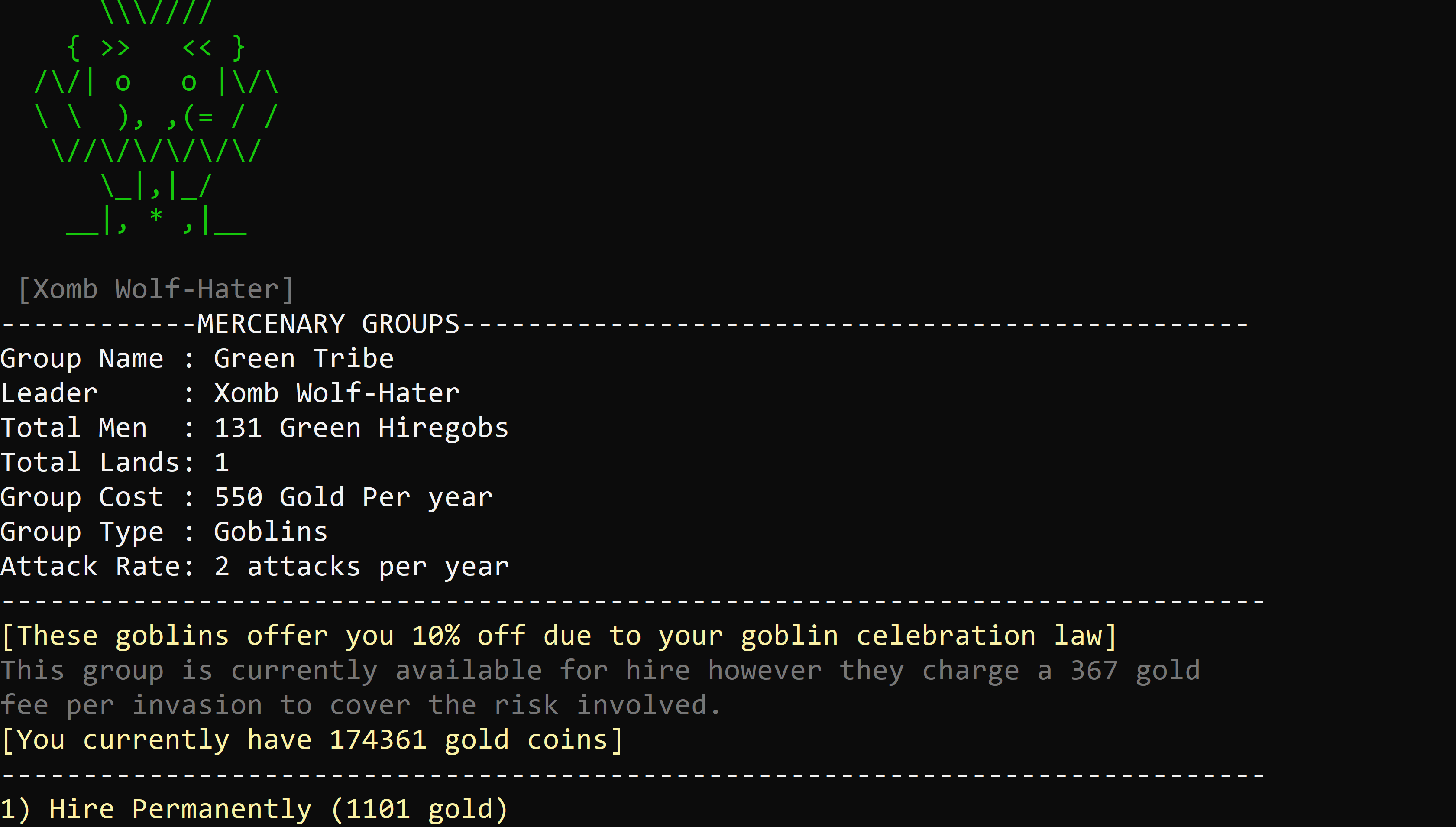 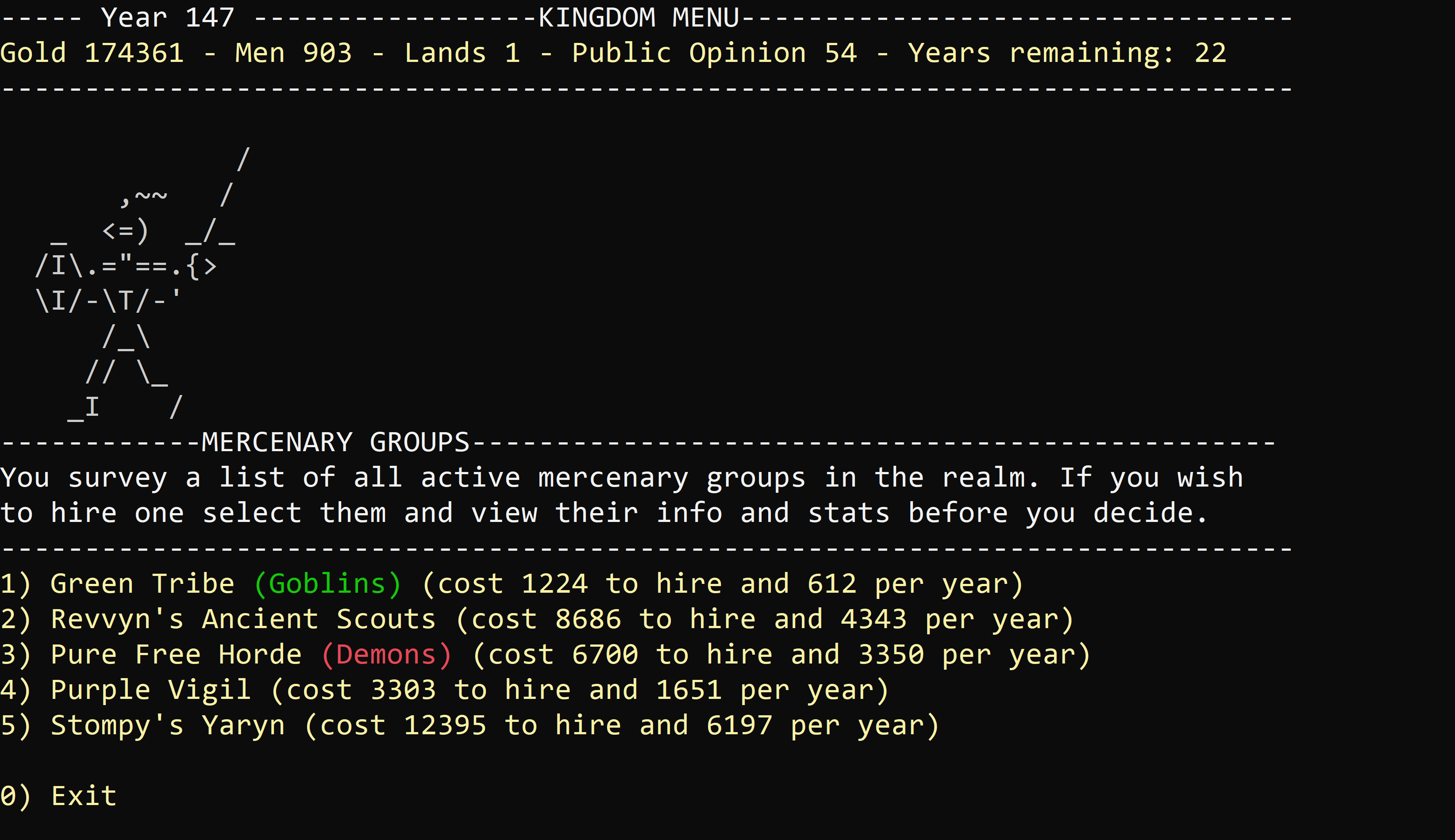 I know it's a bit silly but those 10 gold, heads or tails coin flipper encounters have really been feeling samey to me lately, so I set out to turn them into a whole range of possible encounters instead of just the one standard one

* Added ability to ask why they gamble

* Added ability to ask about the coin they use

* Added ability to ask how to play the game 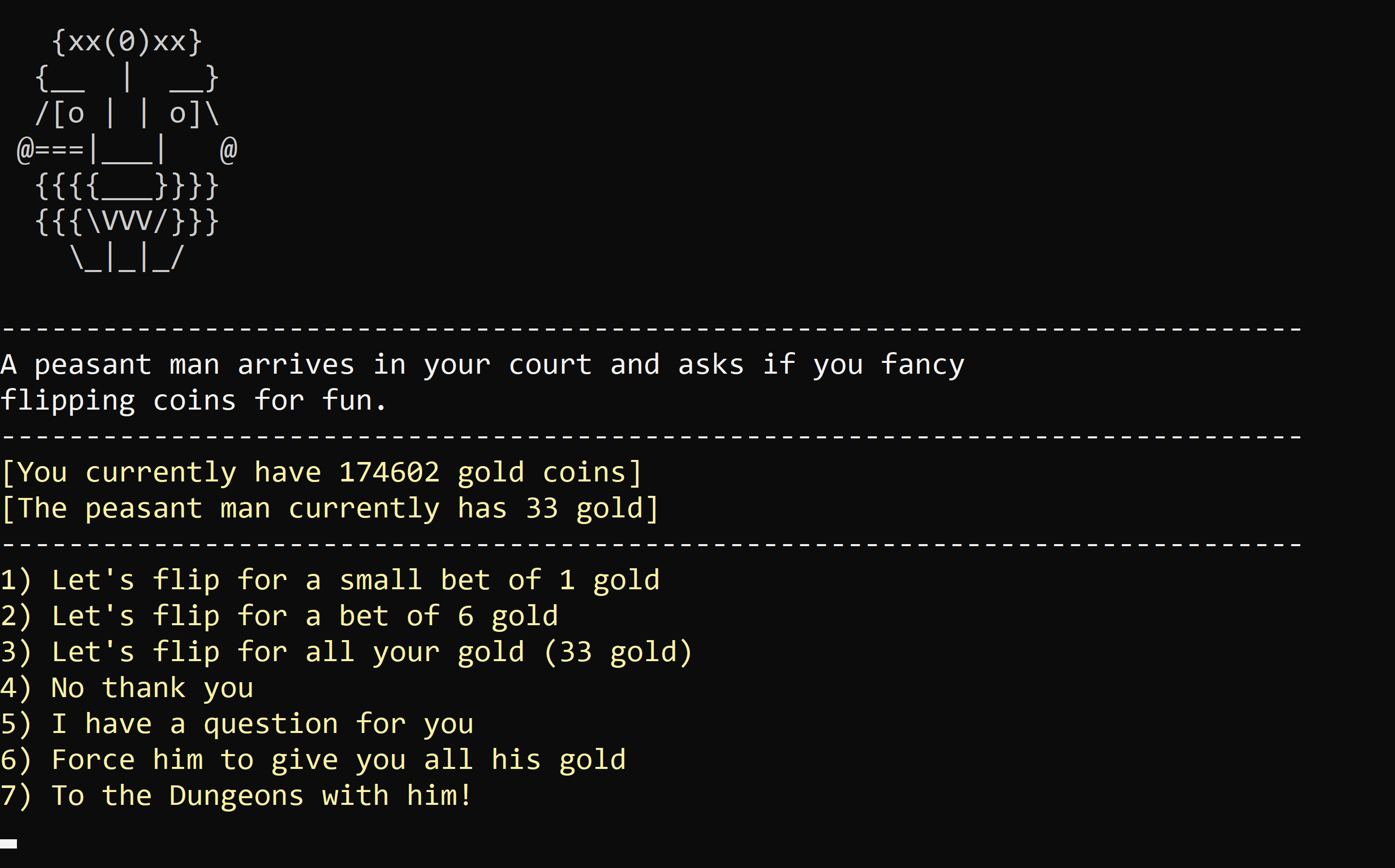 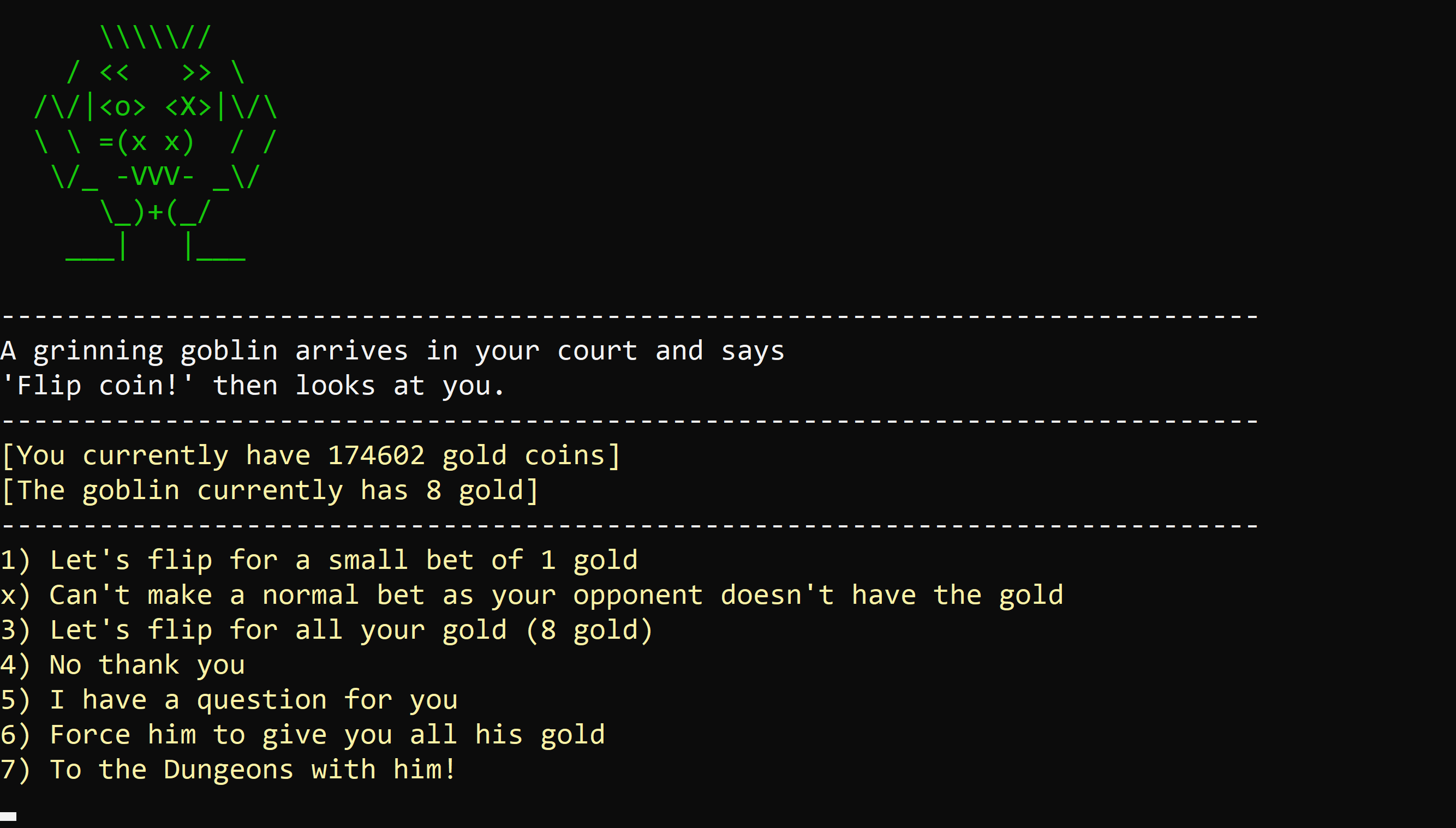 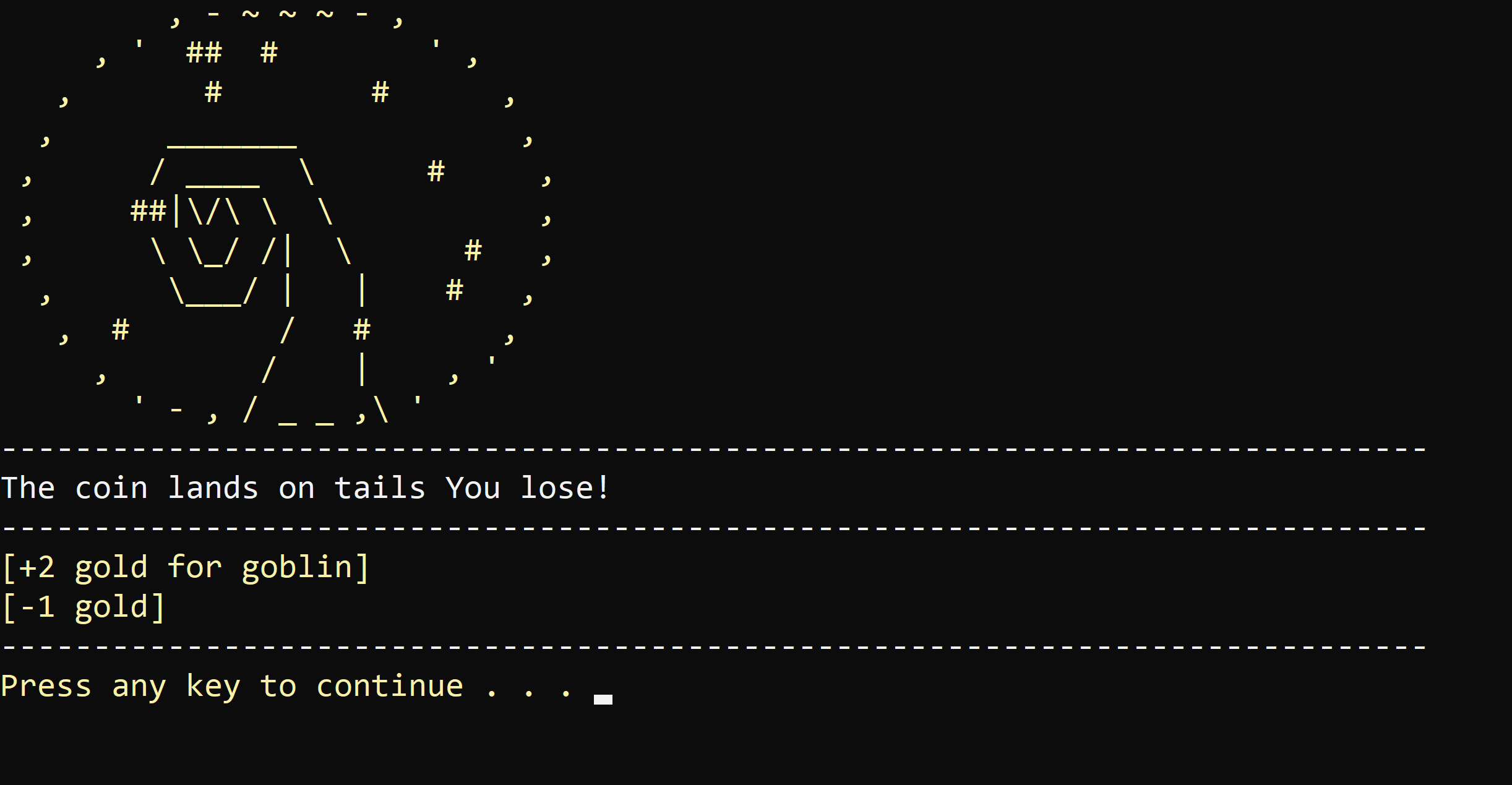 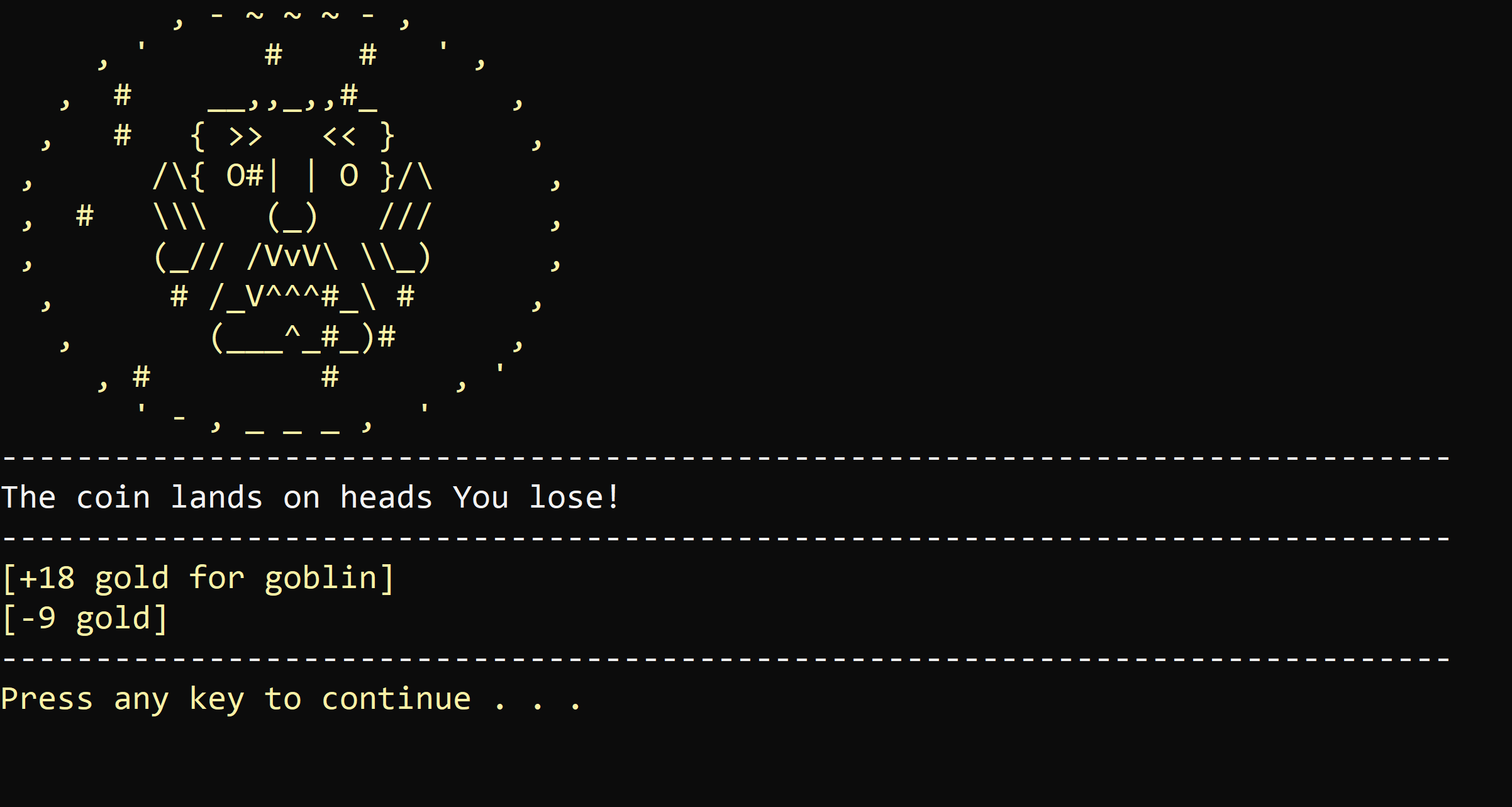 HOW COULD YOU BE SO HATLESS? (3 features)

Has the poor hatless gnome of the cave gnome village suffered enough? Apparently not!

* Added option to give the hatless gnome a gold coin

The update you've all been asking for, genital guards! To protect everyones crown jewels! 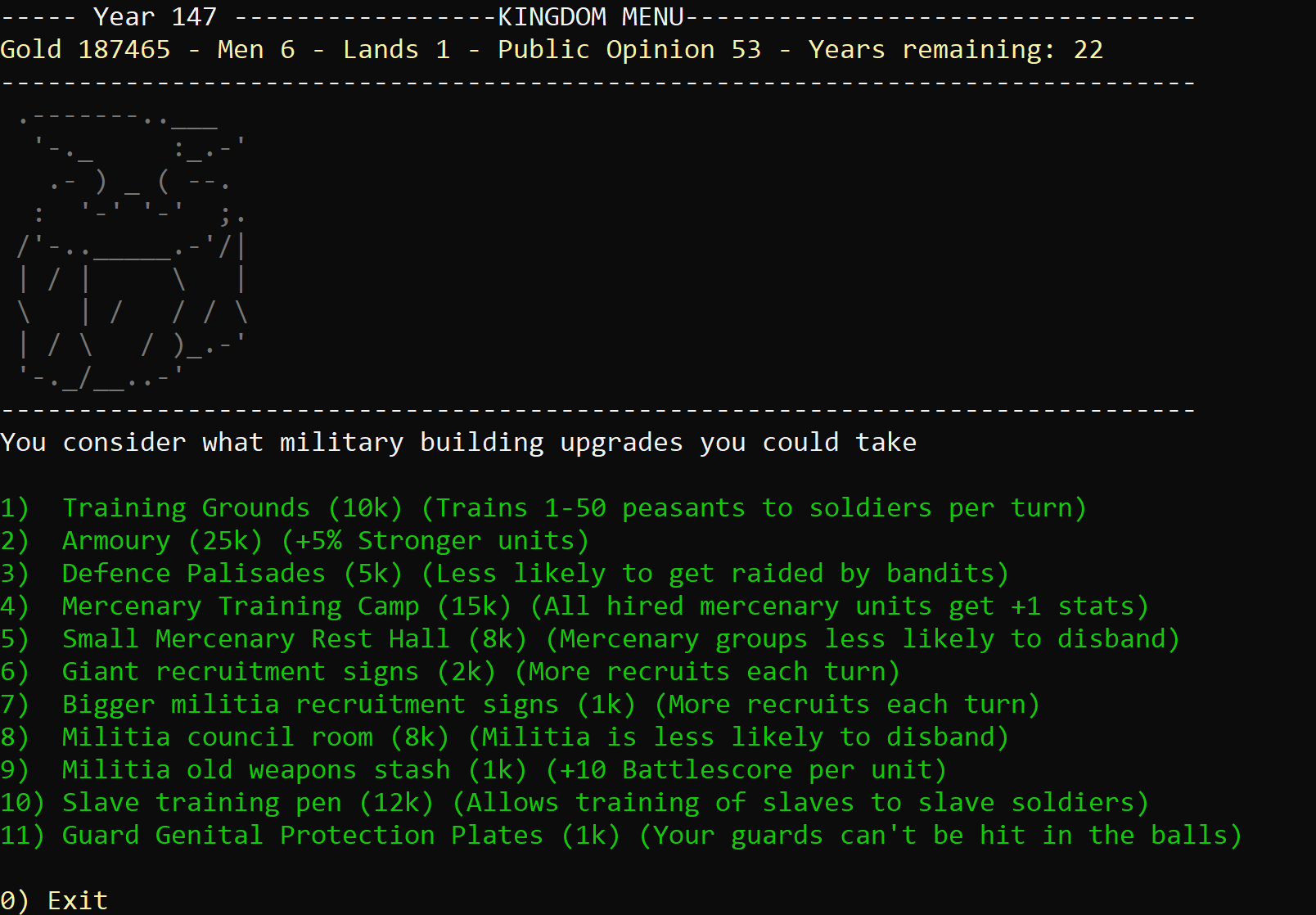 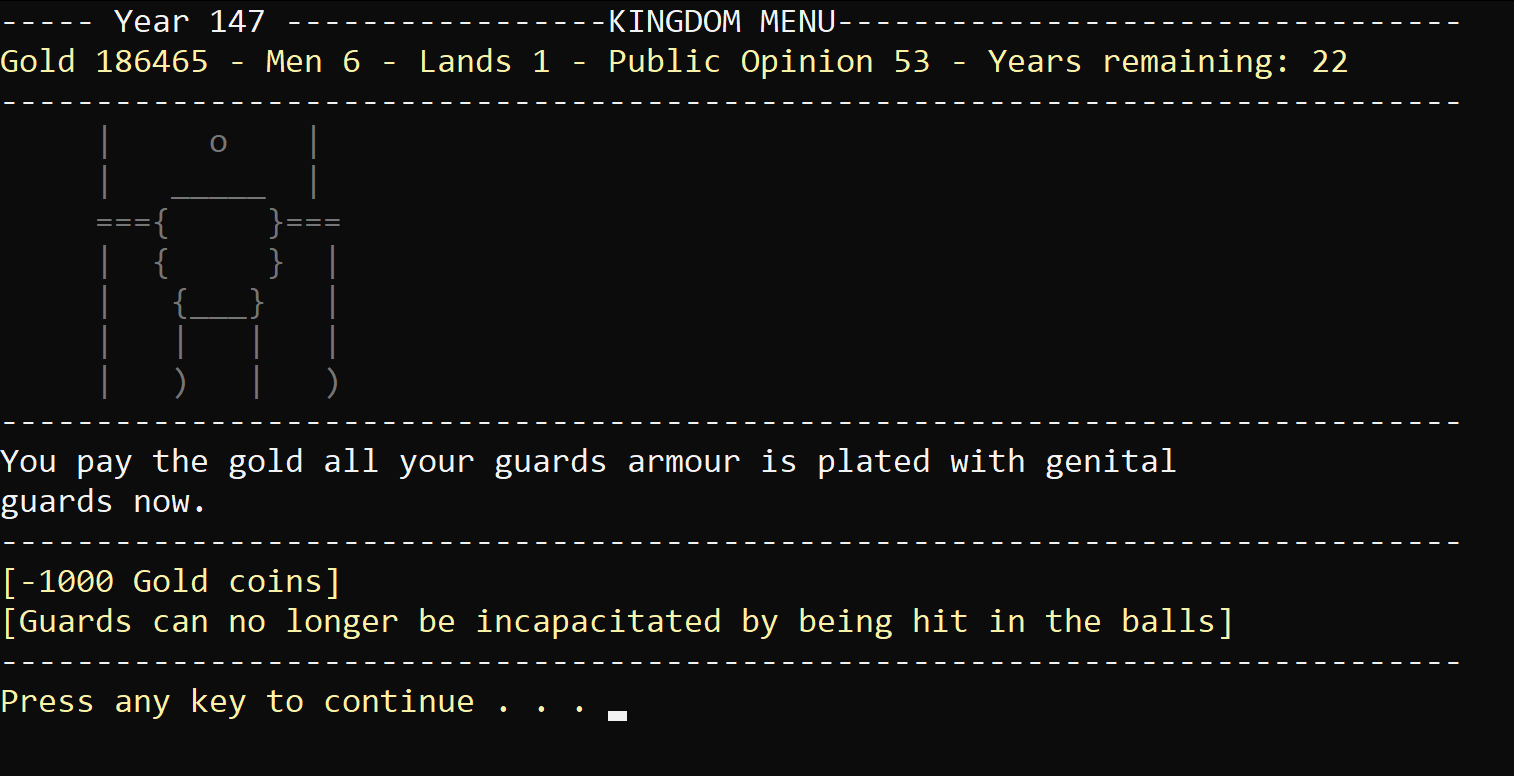 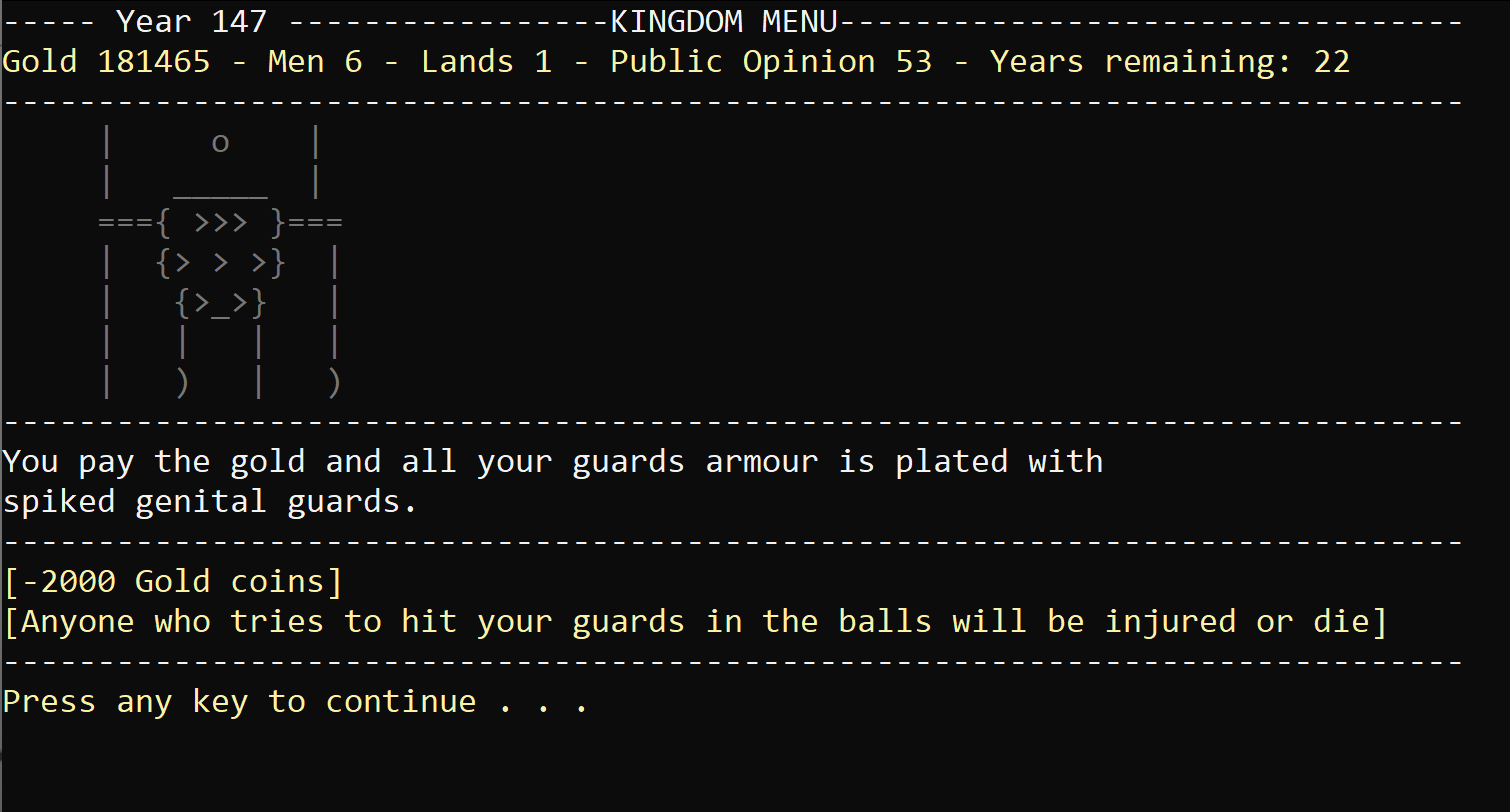 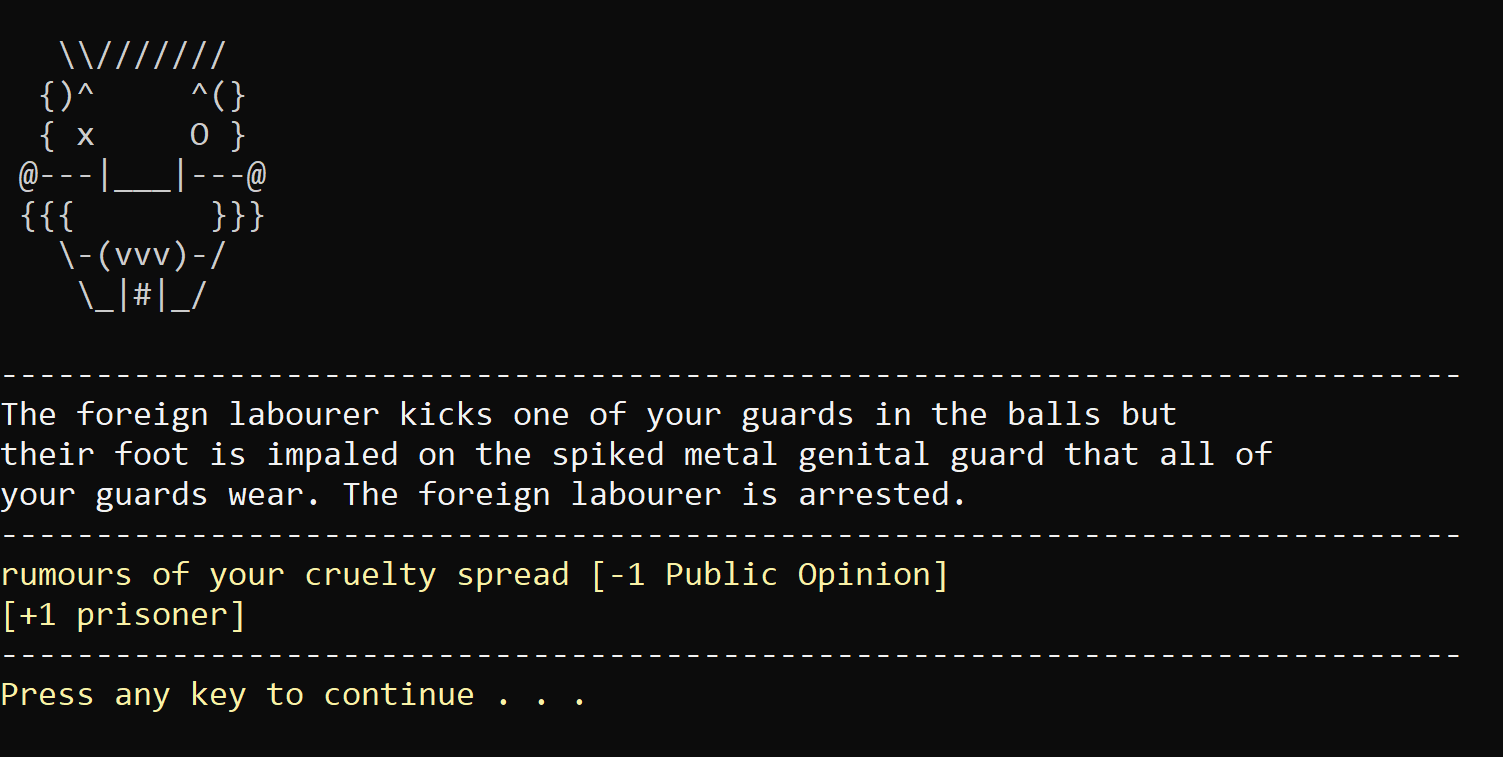 I wish I could claim this as an extra 2 trillion features...

Based on Tribune_Bunduk's excellent Warsim comics, I tried to add references to his throne room encounters to the game. I also added a bunch of additional encounters inspired by them.

It recently occured to me that mercenary groups never had the name of their leader in them and I thought it would be nice if some did, for variation!

Thought I'd add a few names inspired by my own for a bit of a joke. It is now possible for a character to be spawned in game with both my first and last name, but super rare! I hope to exist in someones gameworld at some point :)

Always more bugs to fix... one day I will get them all.

* Added new event when destroying the lute in the luteplaying neighbor dispute, where the musicians guild send you a letter (credit BigSimple)

I've been struggling a little lately and while Warsim is still 100% a full time project for me, catching covid and other life issues have temporarily knocked me off the saddle. I'm heading away for a month but have gotten myself a small work laptop and plan to crack out some coding while I'm away. When I return I aim to hit the ground running and get to work on more features and planned updates.

Regardless thank you all for the constant love and support!

Huw I was worried about your long absents I admit, and sure less updates is a bummer but man you have cranked them out so frequently in the past that I figure you've earned allot of vacation time. :)

I know this has to be shit for you not being able to keep up as well, but everyone knows that you are your own worst enemy and that people often hold them selves to standards that they wouldn't hold others to.

So please try not to feel too bad for not spoiling us as much as usual.  Going from overachiever dev to normal dev shouldn't be grounds for execution, especially with getting Covid and the state of the world weighing on everyone's motivation.

Thank you for the kind and considerate comment mate, and sorry for the late reply <3